Popular with both beer drinkers and bottle collectors today, Resch’s is an Australian immigrant success story.

Edmund Resch arrived in Australia from Germany in 1863, probably with his younger brother Richard, and after spending time on Victorian and New South Wales mine fields and as an hotelier in Queensland, he and Richard bought a cordial and aerated water factory in bustling Wilcannia in 1877. Business flourished and in 1879 the pair opened the Lion Brewery in the township.
Four years later, the brothers expanded their activities by taking over Cootamundra’s Burton Brewery. Originally established by Mary Jane Rochester, Henry Morton and Frederick Henry Jackson in 1881, the new owners renamed it the Lion Brewery in line with their earlier establishment and in December 1883 advertised that “…for cleanliness, condition, fullness of the palate, great keeping qualities and mellow vinous flavour, our ales cannot be surpassed.”

In 1882, a third brother Emil arrived in Australia after serving a brewing and malting apprenticeship in Germany and following a short stint in Melbourne, moved to Wilcannia to join his siblings. By 1885, their expanding business empire also boasted branches at Silverton and Tibooburra, but in August that year, the partnership was amicably dissolved, with the various holdings split up between the brothers.
Richard continued the Cootamundra and Tibooburra businesses, and after trying unsuccessfully in 1888 to sell the former brewery, carried on until 1903, when he relocated to the Clarence River Brewery at Maclean. Operations ceased around 1915.

Edmund carried on at Wilcannia until 1892 when, after installing a manager to oversee operations, he moved to Melbourne intending to retire. This was short lived, however, and three years later he relocated to Sydney to take over management of Allt’s, a brewing, wine and spirit company, on behalf of a banker who had supported him in his early business activities.

After purchasing Allt’s Brewery in 1897 for more than £65,000, Edmund went on to acquire the New South Wales Lager Bier Brewing Company Ltd’s Waverley Brewery business and plant in Redfern three years later. Together with his sons Edmund and Arnold and his accountant/manager John Alvarez, he embarked on major construction works to centralise activities on the Dowling Street, Redfern site. Directories show that he also continued to operate his Wilcannia business until at least 1909. 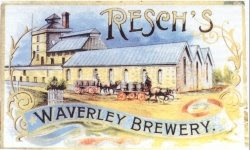 Promoting himself between 1904 and 1914 as “brewer by appointment to His Excellency the Governor-General”, Edmund became so successful that his brewery’s output secured much of the State’s market. In 1906, Resch’s Ltd was incorporated with a capital of £150,000.

Despite, or perhaps because of his German roots, Edmund contributed generously to Australia’s war effort after the outbreak of WWI, as well as paying his sixty-odd enlisted employees the difference between their service and civilian wages. Nonetheless, he was not immune to the 1916 War Precautions (Alien Restriction) Regulations that required all non-British subjects aged fifteen and over to register their whereabouts. In November 1917, he was arrested and interred at Holdsworthy, near Liverpool, home of Australia’s largest war internment camp, despite having been a resident of Australia for more than fifty years.

Resch’s Waverley Brewery was taken over by Tooth and Co in 1929, Edmund’s family exchanging the business for shares in the parent company. However, despite Tooth’s also disappearing under the banner of Carlton and United Breweries during the 1980’s, Resch’s Draught and Pilsner remain popular beers in New South Wales right through to the present day.

Following the 1885 partnership dissolution, Emil took over the Silverton branch of their Lion Brewery and by 1888 was producing more than 90,000 gallons of the amber liquid annually. That year, he established a cordial factory at Broken Hill, and soon after opened a brewing and aerated water works at Menindie.

After moving to the Victorian capital in 1898, Emil became general manager of the Melbourne Brewery and Distillery Ltd (Victoria Brewery). In 1902 it was remarked that "In Mr. Emil Resch, the general manager of the Victoria Brewery (The Melbourne Brewing and Distillery Limited), East Melbourne, the company is to be congratulated upon possessing so capable a manager. The firm has at various periods been under different management, but at no time has one worked more conscientiously to study his employers' interests than the present manager. As his name implies, Mr. Resch is a German. Born in Wurttemberg in 1860, he was early apprenticed to the brewing and malting business. Like the majority of Teutons, he was taught the meaning of the word "thoroughness" by commencing at the bottom of the ladder - the coopering department, in this instance - and working his way up through all the different branches, before becoming proficient as a practical brewer. In 1882 he left his native town, determined, if possible, to establish for himself a good position in the colonies. After a short stay in Melbourne, he went on to Broken Hill and Wilcannia, but eventually decided to stay in the Silver City, where he still owns the business he then took over. In proof of his thoroughly efficient management, it is only necessary to point to the ever-increasing output of the two businesses under his control..." Emil continued to operate his Broken Hill and Silverton businesses until at least 1909.

In 1905, Emil, along with W. L. Baillieu and C. L. Pinschof representing the Victoria and Carlton Breweries, entered into discussions with Nicholas Fitzgerald, Montague Cohen and others that ultimately led to the 1907 establishment of the Carlton and United Breweries Pty Ltd. Emil, by then part owner of the Victoria Brewery, incorporated his business into the merger in exchange for shares in the new company, going on to serve as the first general manager of Carlton and United Breweries (CUB) between 1907 and 1914. Like his older brother, however, Emil fell victim to the rise in anti-German sentiment in Australia after the outbreak of WWI, and after being given a payout, was relieved of his position at CUB. 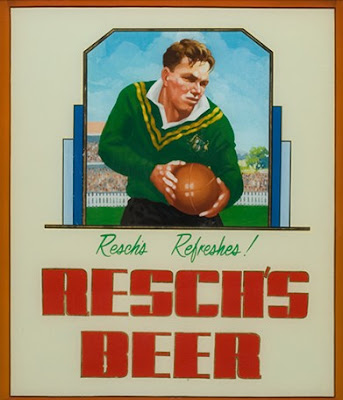